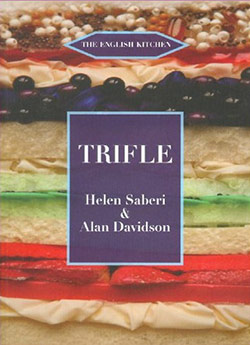 Co-authored with Alan Davidson
Prospect Books, Devon, 2001 (reprinted in 2009)
A Dutch edition was published in 2008

‘Trifle was shortlisted for an award by the Guild of Food Writers in 2002. It has received many favourable reviews. Jill Dupleix in The Times described the book ‘as a little gem’ and Glen Baxter in Books of the Year for The Observer in 2001 said ‘sparkles with anecdote, generous whippings of erudition and the candied stem of the biznaga cactus.

Hugely enjoyable.’ In The Daily Telegraph in May 2008 Jan Moir listed Trifle as one of the books ‘that touched our souls’ saying ‘It’s not even a proper novel, but this is what happens when two great food scholars get to grips with the serious business of trifling.’ In North America it was reviewed by Margo True in Saveur magazine:

‘History meets whimsy in Trifle as Saberi and Davidson chart the rise of the dessert from a simple cooked cream in the late 1500s to today’s multi-layered incarnations. … there is the wondrous collection of 90-some recipes, documenting the trifle’s reach across the globe … I’ve especially enjoyed the trifle belle hélène, with its dense, juicy pears and satiny bittersweet chocolate …’
VIEW on Amazon.co.uk