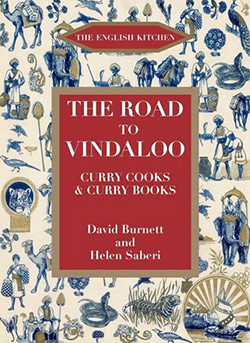 The Road to Vindaloo

‘One of the more surreal facts about British cookery and British taste in the twenty-first century is that the nation’s most popular dinner is claimed to be Chicken Tikka Masala. Just how did a style of cookery favoured by a few intrepid adventurers to the Indian subcontinent in the eighteenth century become so embedded in the national consciousness and affections? The authors have combed through much literature to attempt a useful answer. They have collected a host of recipes from the very first curry in an English cookbook (1747) to those we love to cook in the present day. … And if reading is more your line than cooking, then a feast awaits, as spicy as a Vindaloo, and as fragrant as the stock for Pat Chapman’s Balti Chicken and Mushroom.’

This book was named one of the year’s ten best food books by The Sunday Times. It is a collection of recipes tracing the history of the British curry from medieval times up to the present.