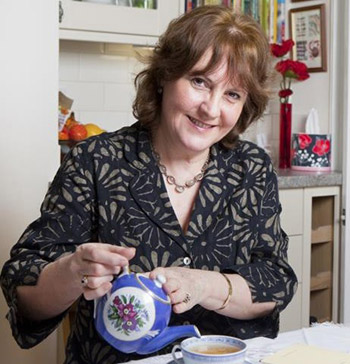 I am originally from York and grew up in a village called Upper Poppleton. After school and college I joined the Foreign and Commonwealth Office. My first posting, in 1970, was to the British Embassy, Warsaw. This was followed in 1971 by a posting to the British Embassy, Kabul. It was here I met my husband, an Afghan engineer. We lived in Kabul until 1980.

We left Afghanistan in 1980 because of the Russian invasion and came to live in England with our then 3½ year old son Alexander. We settled in Putney, London. In 1983 I decided to write an Afghan cookery book. I wanted to try to record Afghan cuisine with its rich and varied cultural traditions before it became lost due to the war and the massive exodus of refugees to countries all over the world. Noshe Djan – Afghan Food and Cookery was first published in 1986 by Prospect Books and was beautifully illustrated by Abdullah Breshna.  A second edition came out in 2000 alongside an American edition published by Hippocrene of New York.

In the 1990s and until 2003 I worked for Alan Davidson, mainly on The Oxford Companion to Food which was finally published by The Oxford University Press in 1999 to great acclaim. I feel very proud and honoured to have been, in Alan’s words, his ‘co-pilot in completing the book’.

In the 1990s and until 2003 I worked for Alan Davidson, mainly on The Oxford Companion to Food. This magnum opus was finally published by The Oxford University Press in 1999 to great acclaim. It was such a fantastic opportunity for me to have worked on this book with Alan and I feel very proud and honoured to have been, in his words, his co-pilot in completing the book.

After the Companion Alan and I wrote a little book, a sort of frothy light dessert to the main course of the Companion, called Trifle. We had great fun writing this book together, testing recipes and Alan especially enjoying the tastings.

Meanwhile I assisted Alan in revising his three regional seafood books: Mediterranean Seafood; North Atlantic Seafood; and Seafood of South-East Asia. Also during this time I collaborated with Alan in editing the anthology The Wilder Shores of Gastronomy published by Ten Speed Press in 2002.

In 2003 Alan was awarded the prestigious Erasmus Prize in the Netherlands. In a way it was a kind of glorious farewell for, shortly after enjoying a week in Amsterdam and receiving the Prize presented by Prince Bernhard and Queen Beatrix, Alan died peacefully at home in Chelsea on 2 December.

It was during this time that David Burnett, publisher and owner of Excellent Press, asked me to help him finish a book he was writing on the history of the British curry. The Road to Vindaloo: Curry Books and Curry Cooks was published in the English Kitchen series by Prospect Books in 2008.

Tea: A Global History for the Edible series of Reaktion Books was published in 2010 as was the anthology Cooks Delights for Max Press, Little Books. Turmeric: The Wonder Spice, an e-book co-authored with Colleen Taylor Sen was published by Agate in the USA in 2014. My latest book is Teatimes: A World Tour published by Reaktion Books.

I have, since 1991, attended the annual Oxford Symposium on Food and Cookery and have contributed a number of papers on topics relating to Afghanistan – see Articles. I was a Trustee from 2009 to 2012 and was the editor of the Oxford Symposium Proceedings for the volume on Cured, Fermented and Smoked Foods (2011).

I continue to take an interest in Afghan affairs. My husband returned to Afghanistan in 2002 after the fall of the Taliban to help with reconstruction and I visited several times but since 2006 have not returned due to the security situation. I am in touch with several charities doing amazing and valuable work in Afghanistan including AfghanAid, Afghan Appeal Fund, Sandy Gall’s Afghanistan Appeal, Friends of Aschiana.